Here is my letter to the editors of The New York Review of Books, in response to Christopher Benfey's article on Norman Rockwell ("An American Romantic," December 19, 2013). Since I've never had a letter to the editor published in a national periodical (and don't expect this one to be published either), I've decided to peremptorily blog it here.

[Norman] Rockwell's body of work will compare poorly with [Edward] Hopper's as long as it goes unremarked that the greatness of such artists as Hopper has largely been constructed in opposition to the popularity of artists such as Rockwell to begin with. The modern canon after all exists only in opposition to that which is outside the canon. Never mind Hopper's beginnings as an illustrator, or the fact that by now he can be relied upon to sell a comparable number of calendars. If you’ve seen six great Hoppers, you've pretty much seen them all; whereas you need to see several dozen Rockwells before you can say the same of his career. In other words, as important as Hopper’s view of America, it is rather simple if not monotonous (composed as it is of alienation, unfulfilled desire, and large empty voids, even when more than one human figure is present on a canvas), while Rockwell’s America is far more varied, subtle, and complex. It may be a largely contrived and sentimental complexity, in a Dickensian sense, but it is a complexity that can no more be grasped by the handful of images circulated around the holidays than the literary scope of Dickens can be fully derived from A Christmas Carol.

Alas, "the old battles" over canonical modernism have not waned nearly so much as Christopher Benfey suggests. As an art history instructor, I can report from the front lines that the most daring young researchers wishing to study American illustration end up getting diverted by their advisers from straight art history into "visual culture studies," a circuitous theoretical slog presented as tolerant and open-minded interdisciplinarity, but which in reality is a ham-fisted effort to defend and keep pure the realm of high art at all costs. It is a move sadly rendered necessary only because [Peter] Schjeldahl’s "gap" between illustration and high art is still reified as "a battle line," blinding art history to material the study of which clearly belongs in its domain. 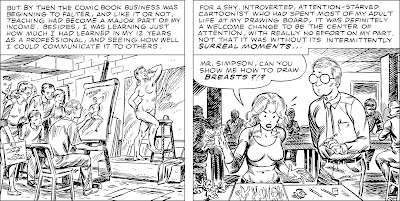 This despite the fact that the conveyance of such narratives of exclusion has become increasingly untenable in the twenty-first century classroom. Fewer and fewer undergraduate art history majors today are equipped to grasp unaided the concept of print distribution, let alone any rationale for the exclusion from consideration of an entire class of imagery created for such bygone artifacts as mass-market magazines. Particularly when the work is as demonstrably fecund and accomplished (use of the word talented being forbidden) as Rockwell's. Many students, of course, will accept that Rockwell is "not an artist" in the modern sense if that is what they are told (and understand will be on the exam), just as many will accept at face value the narrative in which Maya Lin is the hero and Frederick Hart the villain of the 1980 Vietnam Veterans' Memorial competition. But those students who think at all critically (or simply for themselves) about such assertions, as we ask them to do, will see no more validity in academia’s blatant discrimination against proletarian (i.e., working professional and almost always representational) artists of the modern era than that suffered by females prior to Linda Nochlin’s 1971 "Why Have There Been No Great Women Artists?," an essay that suggested for the first time that the problem may not have been with the quality of the art so much as with criteria that had been meticulously stacked.

It is only when the gap itself can be seen as entirely illusory that it may begin to close or completely vanish, and an assessment of the full spectrum of artistic practice in the twentieth century become possible. Until then, any history that picks winners and losers (as art history has so blatantly done over the past generation or two), instead of supplying an objective and critical account of what actually transpired, is a history unworthy of the name.

See also: The Withering Away of Drawing
Posted by Donald E. Simpson at 9:09 PM