When: An opening reception will be held Saturday, October 11, from 1:00 to 5:00 PM. Free to the public and free parking. 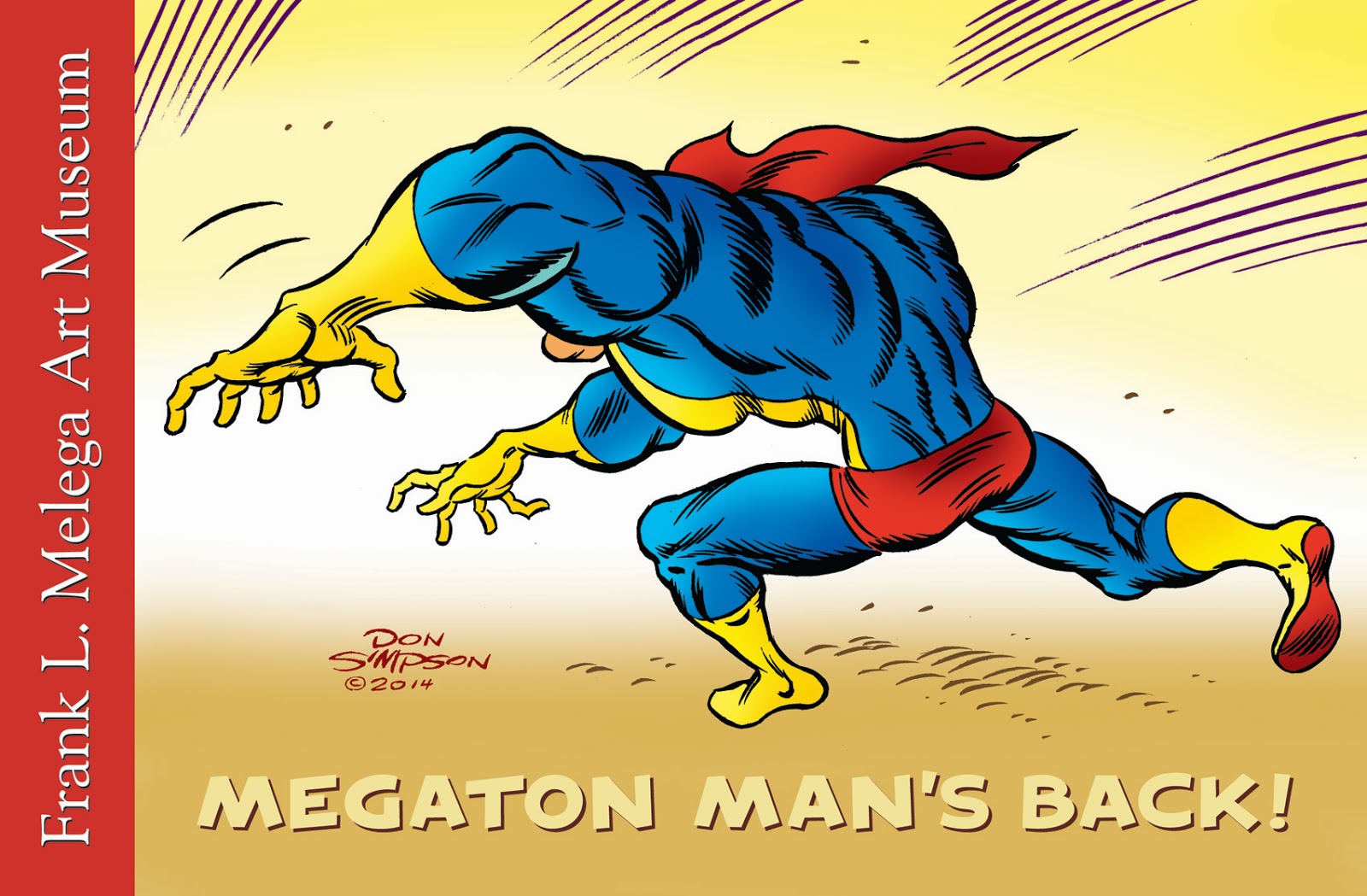 Cartoonist Don Simpson burst on the scene in the Orwellian year of 1984, at the height of Reagan’s arms race, neutron bombs, “Minute-Man” missiles, and “dense-pack” multiple-warheads packing twenty megatons (millions of tons of TNT) of explosive force each. The American comic book was also in artistic decline, the superhero genre regurgitating tired clichés. Simpson’s Megaton Man, with a physique that made Arnold Schwarzenegger look like a 90-pound weakling, and a brain of limited functionality, became a good-natured vehicle to satirize both Cold-War culture and “Silver Age” comics. Simpson’s hilarious satire was an immediate hit for underground publisher Kitchen Sink Press, and was at the forefront of an Independent Cartooning Renaissance that included the Hernandez Brothers’ Love and Rockets, Scott McCloud’s Zot!, and Art Spiegelman’s Maus.

Simpson’s megaheroic creation has appeared in over 35 comic books and graphic novels since then. Following a decade off from comics that included illustrating Al Franken’s bestseller Lies and the Lying Liars Who Tell Them: A Fair and Balanced Look at the Right, and earning his PhD in art and architectural history from the University of Pittsburgh, Dr. Simpson is ready to retool his best-loved creation for the 21st Century. The post-9/11 “War on Terror” storyline sends America’s Nuclear Powered Hero on a more somber new chapter, complete with an African-American female version of himself: Ms. Megaton Man. The new adventures will still feature Simpson’s inimitable brand of humor, with old favorites like Yarn Man and X-Ray Boy, and new characters like The Doom Defiers.

Megaton Man’s “Rebirth at Half-Life” exhibition opens Saturday, October 11th, 1- 5 PM, at the Frank L. Melega Art Museum, Brownsville, Pennsylvania. Examples from Dr. Simpson’s 30 years of cartooning will be on display, including rarely-seen early original art plus works-in-progress from his forthcoming graphic novel, Megaton Man: Return to Megatropolis, slated for 2015. Preliminary sketches, figure studies, and more will be included. Some of the artist’s personal collection of original comic book artwork by his influences, including Jack Kirby, Wally Wood, and John Romita Sr., will be showcased.

Visitors will get a glimpse into Simpson’s creative process from initial conception to finished comic book art. Some of the art that made Megaton Man a cult sensation in the 1980s and 1990s will be on display, along with previews of the new, darker storyline. As Simpson explains, his characters may not have physically aged, but they have grown more psychologically complex. “Megaton Man now has baggage. His once-air-headed girlfriend is now a very competent and powerful leader of a new megahero team, and their son is developing nuclear powers of his own. Even a former sidekick has grown estranged from The Man of Molecules. The new material will still have a sense of humor, but in other respects it will reflect a more mature sensibility. That was a mix that superheroes in the sixties achieved, but lost over the years.”

The Melega Art Museum will also premier a signed and numbered limited edition for sale that the artist, upon request, will remarque (modify with hand-drawing) to create a one-of-a-kind work of art.

The opening reception will be held Saturday, October 11, from 1:00 to 5:00 PM. The public is invited, free admission, and free parking. The exhibition will run from Saturday, October 11 until Sunday, December 14. The Frank L. Melega Art Museum is open weekdays. Please call 724-785-9331 for the current hours of availability. Sunday hours are from 1:00 until 4:00 PM. The museum is also open anytime by appointment. Call 724-785-9331 to make arrangements.

Visitors of all ages will gain insight into how comics are created. Examples of the different stages an artwork goes through from the initial sketch to the finished inked drawing are part of the exhibition.

In addition, the Melega Art Museum has a very special event planned. “Portfolio Saturday” will be held 1 to 4 pm on Saturday, Dec. 6, marking the 30th Anniversary of the release of Megaton Man #1. Aspiring cartoonists may bring a sketchbook and/or up to 6 pieces of art for review by the artist. Don will also demonstrate cartooning technique, including penciling, inking and lettering. This event is free but attendees are advised to pre-register with the museum by calling 724-785-9331 or by emailing “director@melegaartmuseum.org”, as time and number of portfolio reviews will be limited.

For more information about the Frank L. Melega Art Museum, upcoming events, hours of operation, or the Flatiron Heritage Center call 724-785-9331 or visit the website: http://melegaartmuseum.org.
Posted by Donald E. Simpson at 12:44 PM No comments:

The Space Explorer's Club, the fifth volume in Titan Comics' complete First Kingdom by Jack Katz, is out. Not only is it another handsome volume in the series, but my favorite so far, offering the first new installment of the cosmic saga in a quarter century. His cosmic vision might best be described as that of an American Moebius (Jean Giraud), except that rather than the intermittent and ecstatic burst of insight of his French counterpart, Katz has been carefully constructing an epic he has been committed to for more than 40 years: part Hugo Gernsback old-school sci-fi, part Jack T. Chick New Age Hell-and-Brimstone gospel tract.

I have been a fan of Katz since the original First Kingdom was issued as 24 single issues by Comics and Comix and later Bud Plant in the 70s and 80s, and completed my collection only belatedly in the 1990s. In the late 70s when the work began to appear, it would have been described as groundlevel, a term suggesting something in between underground and mainstream. Other titles that were grouped in that amorphous genre were Cerebus, Elfquest, Star*Reach, otherwise underground titles such as No Ducks, and titles from that Michigan company Power Comics like Kevin Hyde and Mike Gustovich's Cobalt Blue as well as other creators such as T. Casey Brennan. Steve Gerber's Howard the Duck and Marvel's adaptation of Robert E. Howard's Conan the Barbarian, particularly as illustrated by Barry Smith, seemed to offer a mainstream bridge from superheroes to that quasi-illicit world of the slightly-more risque material. 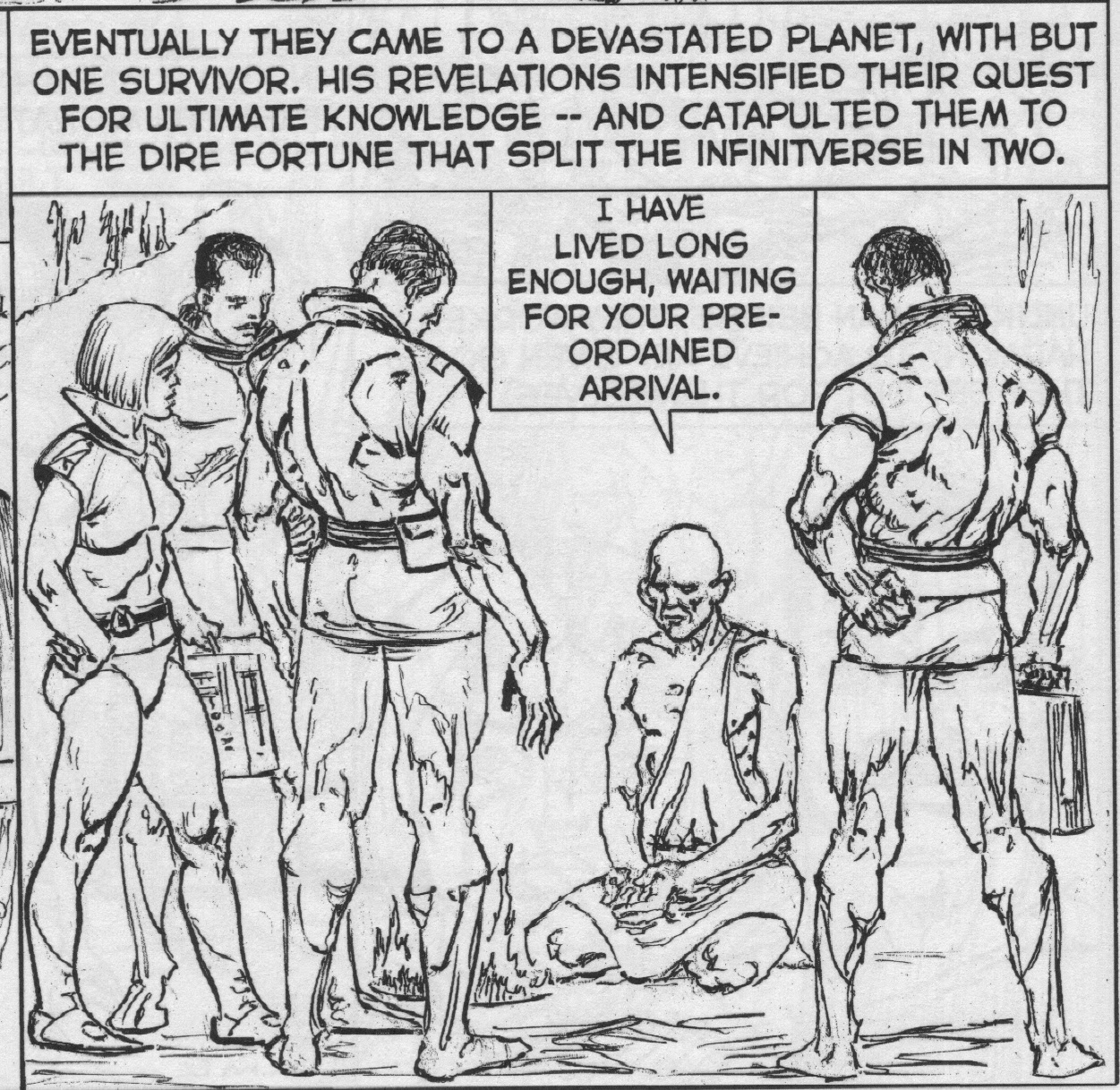 Katz' work was never explicitly sexual, although the nude figure was and is central to his conception, with particular emphasis placed on the covered pubic region (I have always called his work groinal). I have to admit I have never read much of it; a self-described "Fosterian," Katz adopted a practice of pasting on huge chunks of text that appear to have been generated by an IBM Selectric typewriter, in a not-particularly attractive face, and pasted those onto his artwork, degrading what would otherwise be quite beautiful tableaux, in emulation of Hal Foster's Prince Valiant. Aside from the aesthetic or formal objection I have to this practice (it is just hard to digest unrelieved blocks of text coupled with little else but mise en scene master shots), both Foster and Katz assume a pretentious, pseudo-literary voice which makes their text not only difficult to process with the images, but almost impossible to comprehend in any case. Titan has wisely upgraded the text in their reprints, but have chosen a pseudo-hand-lettered font that emulates comics lettering, instead of an attractive typeface. If you're going for bookishness, why not go all the way? Also, the new lettering is extremely small. 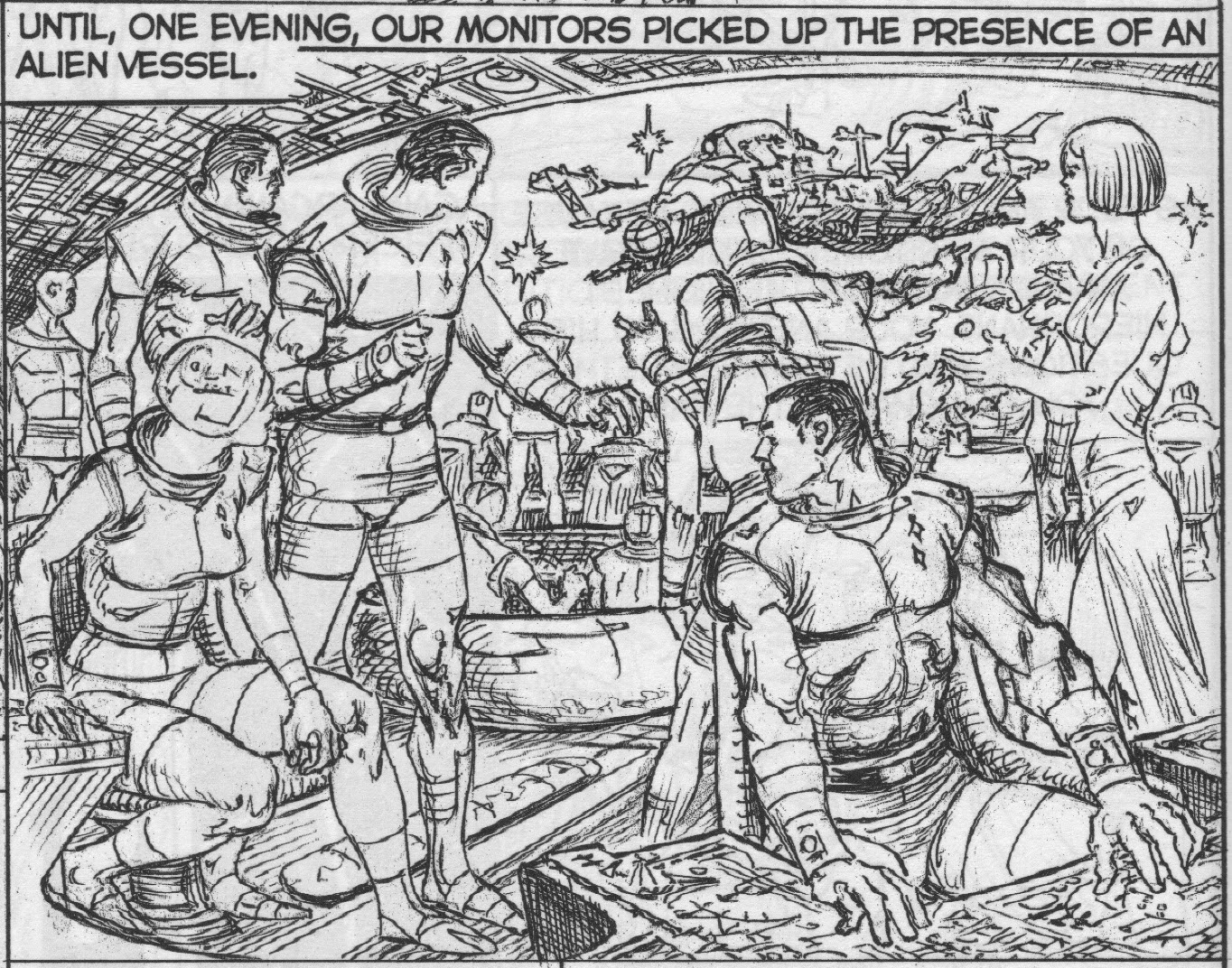 The Space Explorer's Club, however, has much bigger type, which is easier to read, and far more attractive. I still haven't read it all, but I have dipped into it extensively. It is the somewhat Gnostic story of a human couple who are journeying through the universe and perhaps more than one reality to discover their demiurgic programmer's intentions, and the meaning of life. This has always been Katz's obsession, and part of the mystique and grandiose ambitions that even fans of First Kingdom, like myself, who actually have only looked at the art, admire about the series.

The new volume also demonstrates an improvement over the earlier work in that the art is drastically simplified. Katz's imagery was always as dense as his prose, and here the claustrophobic backgrounds and rich textures give way to offer a clearer view of his compositional strengths. His figure drawing, never exactly graceful but always majestic (an anatomically-obsessed combination of the stumpy George Bridgman and the elongated El Greco), manages here to be at least more fluid and free; it's some of his best work ever. The first 90 pages or so appear to be either scanned pencils that have been darkened to a higher contrast digitally, or inked with something like a Uni-Ball roller-tip pen, rather than the crowquill or brush of the earlier work. For the remainder of the book, Katz seems to revert to a brush, spotting blacks more frequently along with employing a thicker outline, but refrains from congesting his visuals to the degree of previous decades. Certainly this is as much a symptom of Katz's advancing years as it is a conscious streamlining, but nevertheless it is a welcome development.

Not everyone will like the new, more simplified Katz, but Katz is an acquired taste anyway. The art of The Space Explorer's Club evokes large-scale cartoons for WPA murals, and his multi-figure compositions and especially his spaceships (which resemble the mobiles of Lee Bontecou) are incomparable. There is nothing like Katz in comics, or for that matter in American or contemporary art, and it is great to have more of his work available now more than ever.
Posted by Donald E. Simpson at 12:54 PM No comments: