Here is the rundown:

From Character to World to Multiverse:
A History of Team-Ups, Crossovers, and Shared Realities

Independent characters have been enlisted into ever-expanding multiverses since the days of myth, and have crossed over in literature, comics, and movies ever since. Whether it’s the DCU (Superman, Batman, Wonder Woman) or Marvel-Timely (Captain America, Sub-Mariner, Human Torch), the individual creative vision has been the building block of modern pantheons.

Veteran comics pro Don Simpson has created his own characters and worlds (Megaton Man, Border Worlds) and freelanced in shared universes (Marvel, DC, Image Comics). Now he offers some unique historical perspectives on how the impulse to share, crossover, and miscegenate has driven narratives from the Wold-Newton Universe of Doc Savage, the Shadow, and Tarzan to modern extravaganzas like Secret Wars and Crisis on Infinite Earths.

There will be something for every kind of fan this richly-illustrated slide show lecture!

The slideshow is an updated and expanded version of a presentation I gave at the 2015 Wizard World Pittsburgh. It is on a subject near and dear to my heart: crossovers, team-ups, and satirical-parody universes. In my career I've been involved in quite a few such projects, including Splitting Image, In Pictopia, 1963, and War of the Independents. 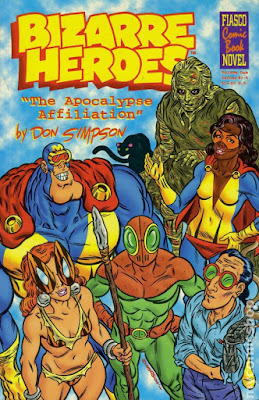 I am particularly proud to be associated with New Dimension Comics and the Three Rivers Comic Con in offering this programming, since I have been at every show put on by NDC entrepreneur Todd McDevitt since his first back in the 1990s.

It is also gratifying to give this presentation to a Pittsburgh audience since both PIX: The Pittsburgh Indy Comix Expo and the Toonseum refused to include me in their programming, despite my long, quiet support of both organizations--neither of which, ironically, exist any longer. (One big difference: I'll try not to knock over my water onto my laptop!)
Posted by Donald E. Simpson at 12:42 PM