One of my favorite classes in high school (after music and French) was Classic Novels with Mrs. White, a plump, white-haired old lady who looked like she had rolled out of a classic novel herself. Among the books I read that semester were Jane Eyre, Great Expectation, Candide, Siddhartha, and Oliver Twist (I did a second Dickens as an elective).

As an adult, my taste ran more to non-fiction, but since 2015 I have been reading more young adult books. This fall, I somehow found the time to read two hefty Victorian novels.

The first is Vanity Fair. William Makepeace Thackeray is one of those familiar names I thought I knew something about, but found I was completely ignorant. I came upon a beautiful remaindered Arcturus Press (UK) edition at my Half-Price Books - a supple edition with a delicious vanilla cover - and knew it was time to make my acquaintance.

All classic novels require some forgiveness - in this case, one had to get over the hump of the narrator's framing device of a puppet show and sometime roundhouse humor. But I found the characters compelling and the story pulled me along.

The great thing about classic novels - if I may refer to them as a genre - is that they have all been studied, and there are ample scholarly or "critical apparatus" to be found on the internet. This is a great help to me - in instantly looking up archaic idioms and keeping track of characters - but I found Thackeray easy to follow, even when Becky became Rebecca then Mrs. Rawdon Crawley interchangeably (I found the various Pitt, Rawdon, and Miss Crawleys a bit more confusing).

Also, thanks to Project Gutenberg and e-readers, there are free, readily searchable texts that allow someone of my limited culture and organizational skills to look up words and find my place after I've set a book aside - although I still enjoy the comforts of paper whenever possible. 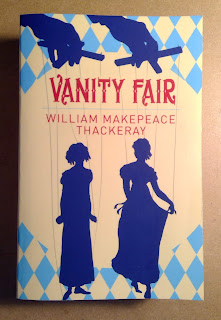 I always thought growing up that I had lived through a sexual revolution in the sixties and seventies, but one only has to look back at some of the now-creaky commentary on some of these classic novels from the eighties and nineties to see that was not the case. One particular oft-cited analysis of Vanity Fair (Bernard J. Paris, "The Psychic Structure of Vanity Fair") is woefully outdated and complete nonsense. Aside from contending that the book lacks "organic unity" (which is ludicrous - the story follows three characters from their teenage years to their mid-thirties - in roughly chronological order; what more unity do you need?), it also completely elides the characters' sexuality - that Becky is a tramp and Jos is a repressed (and perhaps not even repressed) homosexual (Dobbins and Emmy are just repressed, period).

Actually, Becky has sexual agency that we would find very contemporary, and the three main characters (five if you count Jos and the killed-off George Osborne) are all arrested development cases that are a couple centuries ahead of their time. Today, such immaturity persisting into well-nigh middle age is universal; in the early decades of the nineteenth century, such infantile, selfish behavior was reserved only for the upper classes.

This is the general tenor of criticism of Vanity Fair that I have found - and a drawback to classic novels in general. For, if there is ample scholarly assistance to be found - in terms of plot structure and character tracking - there is also a great obliviousness to things sexual that we would take for granted now, nearing the third decade of the twenty-first century.

Indeed, if there is anything cloying about Thackeray - beside his sometimes forced attempts at humor - it is his narrative insistence that he is not judging his characters. Of course, in denying that he is judging Becky, he most certainly is, and in fact Vanity Fair ranks as one of the most pornographic novels of all time, since the dirty parts have been cut out at such a high resolution, the negative space that is left leaves little to the imagination. If Becky hasn't screwed George Osborne (betraying his newlywed Emmy) and blown Lord Steyne repeatedly (himself difficult to distinguish from an anti-Semitic stereotype), I'll eat my copy of Vanity Fair.

[I have found this circumspection about sexuality to be true of much of the late-twentieth century commentary I have found on other authors, such as Anthony Trollope and John Dos Passos. It seems unlikely that this scholarship will be updated any time soon - classic novels as a category of literature have been well tilled, and current scholarship seems unlikely to go over this ground again anytime soon. That's okay - I have a dirty mind that can fill in the gaps.] 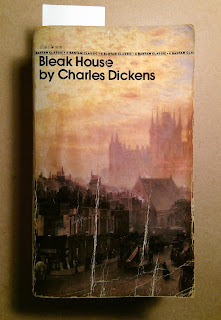 The second classic novel - of which I am only a quarter of the way through - is Charles Dicken's Bleak House. This is much rougher going - it is Dickens at his least charming (or perhaps my recollection from high school and Great Expectations has waxed nostalgic). Half of the book is narrated by Esther Summerson, who so far seems as bland as Amelia (Emmy) Sedley. Despite her long-suffering and generally forbearing nature, her observations are pure Dickens - no satirical flaw escapes her. This creates a bit of a dissonance, but is easily overcome.

Less so is when Dickens himself intervenes - to describe the court case of Jarndyce v. Jarndyce, and the urban mayhem surround Chancery Court. It reads like Diagon Alley without the humor, and in fact Dicken's humor here seems even more forced. His characteristic names (Skimpole, Dedlock, et al) is a practice taken over most notably by J.K. Rowling (Severus Snape, Salazar Slytherin, et al), but in Bleak House, often falls flat, particularly when he tries to invent native American tribes and Britsh reform-minded philanthropies. The chapter "Our Dear Brother" is almost incomprehensible, and in general, when Dickens narrates, it comes off as mean. 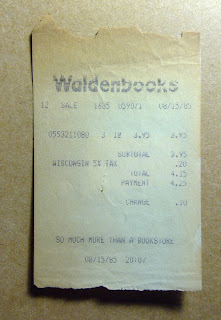 My particular copy of Bleak House is something of a Picture of Dorian Gray for me; I remember buying it brand new while on a shopping trip with Denis Kitchen, Holly Brooks, and their daughters Sheena and Scarlet. I still have the receipt from Waldenbooks from 1985. Somehow I hung onto this copy, and it has aged terribly - it is one of the rattiest editions I own, despite getting no further than twenty pages in initially. It is somehow fitting to be reading such a depressing book in such a dilapidated state, knowing that I've own it all the while it has decomposed. With any luck, it won't completely fall apart before I've finished it.

Recent book reviews.
Posted by Donald E. Simpson at 11:55 AM