Whirled Building: The Working Out of Megaton Man's Megaverse

This is an unpublished page from 1984. Megaton Man #1 had already been accepted for publication by Kitchen Sink Press in April of that year, but a series of hang-ups with printers and promotion would delay the release until December. Over the spring and summer, asked if I could turn the one-shot into an ongoing series, I struggled to envision a series for the satire, producing dozens of stream-of-consciousness pages, none of which added up to a coherent whole. Later that summer, on a nice sunny day, I went for a long walk around Midtown Detroit (from my off-campus apartment near Wayne State University around the General Motors and Fisher Building in the so-called New Center area, rumored to be Ground Zero in case of Soviet missile attack), and got the idea for the second issue, which I drew from scratch in about five weeks. Of the 64 aborted pages, several made it into subsequent issues as set pieces and dream sequences. Other pages, like the one here, penciled in a manic emulation of Neal Adams, was never inked, but many of the narrative ideas were later redrawn, and still resonate in the new Megaton Man material I have been dreaming up! 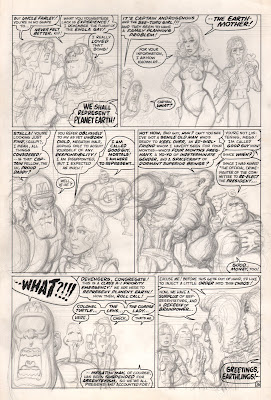 Fans familiar with the original series will recognize the landing scene from issue #9, when the Partyers from Mars finally land in Megatropolis Central Park, albeit in a more primitive form. Uncle Farley, the Golden Age Megaton Man appears, along with Stella Starlight, Megaton Man's estranged girlfriend, now emphatically pregnant. While Stella appeared in civilian clothes in the published comic, here she appears as The Earth Mother, a persona she will not take in the Megaton Man narrative until Bizarre Heroes, the series I self-published in 1994 through 1996. The Devengers also appear (they appear for the first time in Megaton Man #8), except that the Angel of Death (not penciled in yet) is referred to as the Corpse Lady. In fact, Bad Guy hadn't even appeared in the series yet (he would not appear until #3), and yet here he is already a long-time nemesis of Megaton Man, and turning into Good Guy! Captain Androgynous has never appeared in any of my comics.

What is remarkable is how consistent my ideas have proven to be over the years. This piece of art would have been buried in storage when I was drawing Bizarre Heroes ten years later, and essentially forgotten, and yet the Earth Mother persona still resided in my imagination, her basic costume design (a kind of maillot unitard with gloves and boots) remaining intact, although the logo I would later give her looked more like the symbol for ecology. Colonel Turtle looks like an actual in this first draft; later he would be decidedly a middle-aged guy in a cumbersome costume. 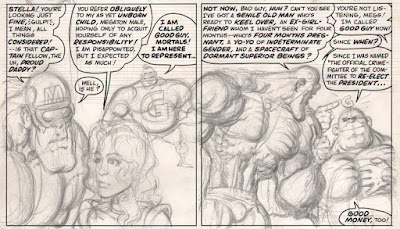 There have been numerous other instances over the years of making notes, sketches, and misfired pages, and either misplacing them or simply never referring to them again, and yet when I finally get to putting an idea in a comic book story, I somehow manage to realize the original idea in most of its main its essentials, Later, when I unearth the original conception, I am surprised at how consistent my imagination is. I have also found this to be true for particular characterizations of such characters as Rex Rigid and Pamela Jointly. When I've written them into new storylines, I think I'm having them behaving in new, selfish, or malevolent ways, but then I go back and reread earlier comics, and realize that that has always been a part of their conception. It is reassuring to know that when I imagine something and establish it as "real" in my mind, it seldom gets lost just because I can no longer locate the original note or sketch.

As for this page, the new graphic novel I am working on, Megaton Man: Return to Megatropolis, still draws upon themes established in my mind practically when I came up with the name Megaton Man. Nuclear terror, psychotic machismo, extended non-traditional family arrangements, and in fact Simon Phloog, the son of Megaton Man and the Earth Mother, are all intrinsic elements in the ongoing storyline. Rest assured that as I have been elaborating new storylines (and endeavoring to retroactively World-Build), I have reread all the old comics so as to preserve established character history, which is how I've realized how consistent my notions are. (Or maybe I just don't have as many new, original ideas as I thought I had!) Previews of this new material can be seen in abundance almost as it is coming off the ol' drawing  board on the Megaton Man blog, with further publication details to be announced soon!
Posted by Donald E. Simpson at 1:30 PM