I’ve always loved this drawing, dating from the mid- or even early-1990s, which would make it 20 years old now. I call her Paleo-Girl, for lack of a better moniker. She takes up less than a quarter of a 14" x 17" Strathmore 400 Series drawing sheet, with the remaining space to be taken up by her pet dinosaur or something. I never knew exactly what to do with her. Being semi-nude, she couldn’t appear in Bizarre Heroes without substantially changing the nature of that series; besides, with the spear and animal skin, she’s a bit too close to the Phantom Jungle Girl, shown below (although Paleo-Girl is supposedly an actual prehistoric feral child, while PJG is a modern urbanite dressed as a cave woman). The stories I can imagine for Paleo-Girl all tend to be rather on the erotic side, but not to the extent of Wendy Whitebread. They also range from the prehistoric to the post-apocalyptic, suggesting that she travels through time. Possibly she’ll wind up as a guest star in the Ms. Megaton Man sequence I’ve been toying with in my spare time for many a year now.

(Below is a sketch of the Phantom Jungle Girl for comparison.) 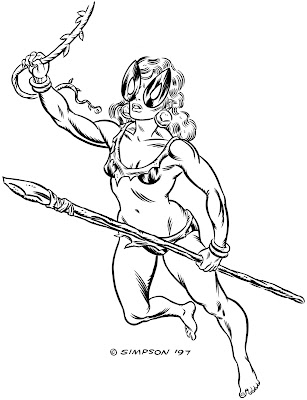 Speaking of semi-nudity (which, growing up in the ‘70s, we all thought would be completely legal now, along with marijuana and liberal politics) and post-apocalypticism, one of the great post-underground comic book series will soon be back in print with improved lettering (but no doubt the same overwrought, clumsy prose): First Kingdom by Jack Katz. Well, you have to be willing to take your epic sweep with a lot of melodramatic banality (which is no worse than most comics anyway, I suppose). My only wish is that it was being issued all in one volume.
Posted by Donald E. Simpson at 8:51 AM