Don, You Drew a Frank Santoro and a Rachel Masilmani

These are studies I made of Frank Santoro's "Frank, You Made a Tom Wesselmann," which was exhibited as part of the Pittsburgh Biennial in 2011. I brought my Carnegie Museum of Art sketchbook class through the exhibit and must have made a quick sketch of it on site; later I refined the figure with two layers of tracing paper. Frank's original was a large airbrush sketch that was somewhere between a contour and gesture line, somewhat indefinite, but suggestive of the entire figure. I loved the pose and wanted to fill it in and render it more literally (in my inimitable flat-footed way, as is my wont). I've done that with other sources, such as Duchamp's Nude Descending a Staircase and Picasso, etc., where I've taken sketchy or abstract figures that I've tried to interpret more literally. (More recently, I've done this with some of my old sketchbook doodles, to mixed success.)

(Note: This effort, including the tracings, has remained in my sketchbook, and therefore technically is a study and not a swipe, the latter being only when one attempts to pass off a published drawing as one's own work without acknowledgement or satiric intent.)

I saw Frank last night at the Little Book Fair in the Garfield section of Pittsburgh, and met him recently at Copacetic Comics, but never made the connection that he was the gallery artist whose work I had swiped! I've owned a copy of his Storeyville for years. Apparently I need names, faces, and work impressed on me all at once to make the connection, or the information goes flying off into space. 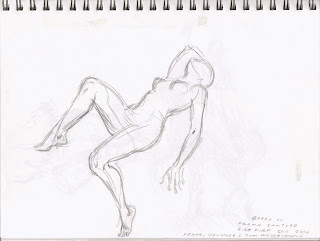 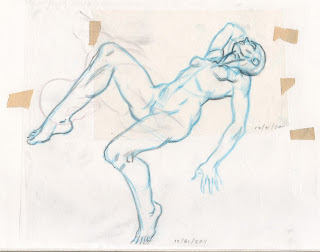 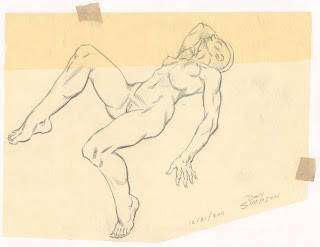 Below, I did pretty much the same thing with a selection of figures from Rachel Masilmani's haunting comic Las Cuerpas (you can download a pdf) after coming across it and meeting her in April 2013, again at the Carnegie Museum of Art, at Drawing Power, a 'zine-and-comics fair and symposium. I've extracted all the pretty figures, but as you'll see, the story concerns the gruesome gynocide of women in Juarez, Mexico, and the conspiracy of silence surrounding these murders, and the revenge of a ghostly, gargantuan Goyaesque figure who strides over the landscape. 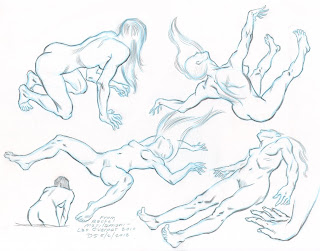